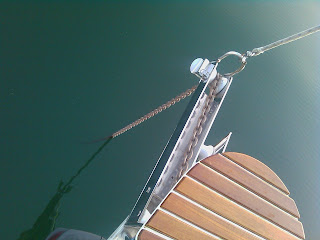 Earlier in the trip the Captain grumbled about previous crew disappointments. I have now added to the list of grumblings.... Our plan was to anchor in Raspberry Bay, dingy over to a lighthouse, and grill our fresh Lake Trout for dinner.

Since this was our first anchorage, the Captain took me to the bow for an anchoring tutoral. Shortly after returning to the helm, he issued the command to drop anchor. I released the windlass and the familiar sound of rumbling chain confirmed the anchor was on its way to the bottom. My unfamiliarity with this ship's anchoring apparatus caused me to briefly remove my hand from the winch lever. It took only a moment for the lever to launch out of the winch into the depths of the anchor locker. Without the ability to provide friction, the chain accelerated rapidly creating an uncontrolled release of chain. I instinctively jumped into the locker to retrieve the lever. The confines of the locker made retrieval impossible, so a quick stomp on the chain stopped the release a few links shy of an empty locker.

My predicament of keeping the chain secure while somehow retrieving the windlass lever from the bottom of the locker was solved when the shadow of the captain was cast upon me. Captain Kip firmly placed his foot on the chain allowing me to re-enter head first to retrieve the lever and brake the windlass.

After the Captain was sure the bow escapades were over, he returned to the helm and set the anchor. I returned to a silent cockpit and a disappointed Captain.

Posted by Bumboat Captain at 5:22 PM