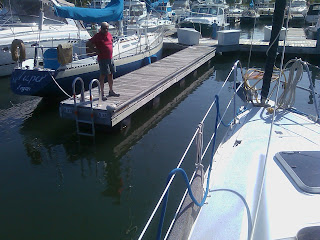 I was in the head when, without notice, the engine fired up. The Captain decided we were moving to a newly assigned dock at the Madeline Island Yacht Club. Upon arriving on deck, I was disappointed to see that the Captain had already removed the starboard stern line. I felt I let him down... up to this point, I exclusively handled all lines. In an attempt to reassert my abilities, I efficiently changed all the dock lines and fenders from starboard to port while Royal Eagle steamed the 150 ft to our new dock. Cleating that last line while the Captain shut down the engine brought me a sense of satisfaction that I restored confidence in the crew.
Posted by Bumboat Captain at 12:22 AM